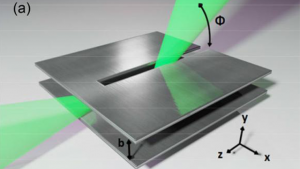 Researchers at Brown University have developed a device to help create an alternative to our strained wireless networks. Their work involves the terahertz (THz) range of the electromagnetic spectrum, which is an exciting but challenging option for wireless communication.

Terahertz waves are higher frequency and therefore have a greater potential bandwidth than gigahertz microwaves, which we currently use for wireless networks. A THz network could provide as much as 20 times faster data transfer than the congested networks we use now. Although THz radiation is difficult to manipulate, scientists have made recent advances, such as a new device that converts DC electric fields into a tunable source of THz. Still, we’re not quite ready for terahertz technology in the real world, since many of the components needed for a THz wireless network have not yet been developed.

Taking a step toward THz networks, Brown University researchers developed a system for multiplexing and de-multiplexing a terahertz stream. Multiplexers are devices that make it possible for several signals to share the same medium (for example, when one cable carries multiple T.V. channels). The Brown team used a “leaky wave antenna,” which is made from two metal plates placed in parallel to form a waveguide. As THz waves travel down the waveguide, some of the radiation leaks out of a slit. The THz waves leak out a different angles depending on their frequency. “That means if you put in 10 different frequencies between the plates — each of them potentially carrying a unique data stream — they’ll come out at 10 different angles,” said Daniel Mittleman, who specializes in Terahertz research at Brown. “Now you’ve separated them and that’s demultiplexing.” A receiver could be tuned to accept radiation at a particular angle, so that it would receive data from only one stream.

The research was published September 14 in Nature Photonics. The authors of the study hope their multiplexer will inspire engineers to develop additional components for a THz network. No doubt, terahertz will continue to be a hot research topic, since it has been hailed for its unique ability to pass through non-conducting materials. In addition to providing speedy data transfer, THz has potential applications in military and medical fields, such as detecting weapons and screening for health issues. “The biggest impact this may have is it may just be the kick that people need to start thinking about this issue,” Mittleman said. “That means they’ll start coming up with clever ideas that are entirely different from this one.”