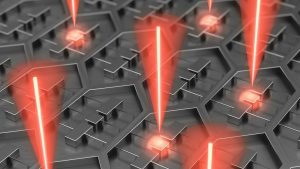 Terahertz lasers could be used in security and medical diagnostics because of their ability to detect chemicals and evaluate materials. However, the technology will need to be improved before it is widely adopted. Researchers at MIT and Sandia National Laboratories have now developed a new way to build terahertz lasers that could make them smaller and more efficient while also enabling them to emit tighter beams. The new approach was inspired by antenna design. MIT researcher Qing Hu explains:

This whole work is inspired by antenna engineering technology. We’re working on lasers, and usually people compartmentalize that as photonics. And microwave engineering is really a different community, and they have a very different mindset. We really were inspired by microwave-engineer technology in a very thoughtful way and achieved something that is totally conceptually new.

In broadcast TV and radio, an electrical current passing through a radio antenna produces an electromagnetic field that induces a corresponding current in nearby antennas. In the new terahertz device, each laser generates an electromagnetic field that induces a current in the lasers around it, which synchronizes the phase of the radiation they emit. The device is made of an array of 37 monolithic lasers on a single chip. The radiation emitted by the lasers is “phase locked,” meaning that the troughs and crests of its waves are perfectly aligned, so power requirements are low.

“This is nothing like a laser-beam pointer,” Hu said. “It really radiates everywhere, like a tiny antenna.” The novel laser design is described in a paper titled “Phase-locked laser arrays through global antenna mutual coupling,” which published in Nature Photonics on June 13.