TDK Corporation has extended its range of EPCOS MKK power capacitors.  The new MKK DCI-R series with resin impregnation is based on the proven MKK DC series with gas impregnation and MKK DC-I with oil impregnation.  The new B2640* series features capacitors rated at up to more than 10,000 µF and designed for voltages of up to 4,000 V DC.

The energy density of the new resin-impregnated capacitors is about 10 percent higher than that of gas-impregnated types.  Moreover, the flat winding technology allows a volume fill factor of about 95 percent, resulting in highly compact components.

Thanks to their rugged design, these capacitors are characterized by high current capability and the ability to withstand high voltage and current peaks.  In addition, the more highly developed internal structure of the new MKK DC-I series ensures better heat dissipation from internal hot spits via the capacitor case.

The new improved MKK DCI-R capacitors satisfy even the most demanding requirements of reliability and enable an operating life of up to 40 years with failures in time (FIT) of less than 100.  Depending on type, the new design permits ESR values down to 0.1 mΩ and ESL values down to 20 nH.  The new capacitors are self-healing and are mainly used in large traction converters and HVDC systems. 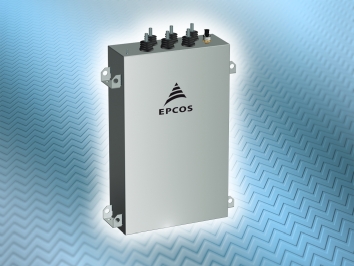