TDK Corporation has developed an EPCOS ferrite disk that has been selected by Linear Technology for a wireless power receiver reference design with its LTC4120-based receiver. The power receiver is rated for 400 mA and simplifies wireless battery charging across a 12 mm air gap. The ferrite disk (B67410A0223X195), which is based on the high-performance EPCOS N95 ferrite material, features low losses over a wide temperature range and is extremely thin with a thickness of just 0.6 mm.

The EPCOS ferrite disk is a key component in the reference design supporting the LTC4120-based receiver. For this wireless power charging application, Linear Technology is using the ferrite like a lens to focus the magnetic flux into the receiver coil, instead of using it as a core. As a result the EPCOS ferrite disk acts as a flux collector so that the flux goes through the coil instead of out into space.

Based on the diameter of the receiver coil and the receive power design target, engineers at Linear Technology selected the new EPCOS ferrite disk, which offered the required diameter and power loss.

Further information on the EPCOS B67410A0223X195 ferrite disk can be found at www.epcos.com/ctvs. 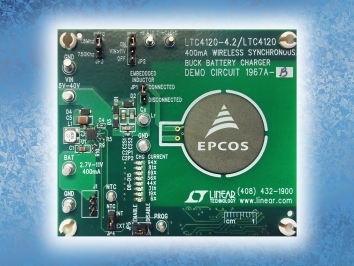