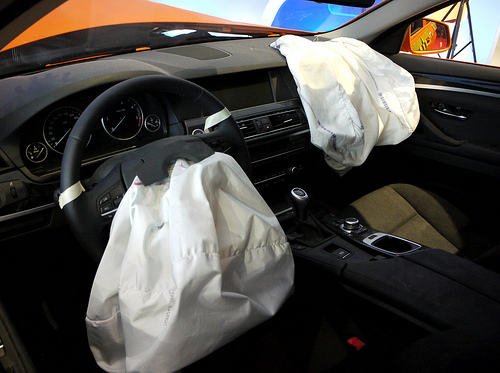 Brace yourselves—we’re going to talk about exploding air bags again. Just last week we reported that Honda, Toyota, and Nissan expanded their worldwide recall to a total of 35 million cars and trucks. If it seems like we’ve been harping on Takata it’s because they are responsible for the largest auto recall in history. What’s worse, they have been downplaying problems with their exploding air bags for the last 15 years. Despite consumer complaints, reports of more than 100 injuries, and six deaths, the Japanese air bag maker has still denied that its products are defective. Takata has previously refused to comply with the regulators’ requests for a national recall, claiming that the air bags would only explode in areas with high humidity.

Finally, on Tuesday, after pressure from millions of vehicle recalls and $14,000 daily fines from the NHTSA, Takata admitted the air bag defect is caused by manufacturing errors and flaws in the components and overall design. They still didn’t quite take responsibility for their role in the injuries and deaths, shifting the blame by claiming that standard industry tests did not catch the defect. However, Takata has agreed to double the number of vehicles recalled in the U.S. to almost 34 million. That means one in seven cars on the roads in the U.S. today has unsafe airbags.

So, is your car on the list? Unfortunately, it is still not clear exactly which cars are recalled. Takata and the NHTSA are coordinating with automakers and will have more information soon. With such a massive recall, repairs could take years to complete, but NHTSA administrator Mark Rosekind said that remedies will be prioritized based on risk, and consumers can drive their cars in the meantime. The department has established a new website to provide regular updates on the status of the Takata recall and other recalls under their investigation.

Another obvious question that remains unanswered: why do the air bags explode? So far, testing and investigation by Takata, auto makers, and independent researchers has not revealed a root cause, but it looks like leaks could allow moisture to infiltrate the inflators over time, degrading the ammonium nitrate propellant that inflates the air bag. This can make the propellant burn too strongly when the air bag is deployed, rupturing the inflator and sending shrapnel into the car’s interior.

The Department of Transportation has called Takata’s recent compliance a major step forward for public safety. In a statement released on Tuesday, Secretary Anthony Foxx said, “The Department of Transportation is taking the proactive steps necessary to ensure that defective inflators are replaced with safe ones as quickly as possible, and that the highest risks are addressed first. We will not stop our work until every air bag is replaced.”