The United States has developed a new technology that will help soldiers in dangerous situations. Designed by the U.S. Army Research, Development and Engineering Command’s Communications-Electronics Research, Development and Engineering Center (CERDEC), this technology could replace many of the tools currently used in the field, leaving soldiers with less equipment to weigh them down.

The new technology is called Tactical Augmented Reality (TAR) and is numerous devices combined into one piece of machinery. It allows soldiers to locate not only their own position, but also the positions of fellow soldiers as well as enemy combatants. Additionally, it is equipped with night vision capabilities. This means that soldiers will be able to ditch their GPS and night vision goggles, relying instead on TAR.

The GPS location functionality is particularly important; right now soldiers must rely on a hand-held system that requires them to be geo-registered at a location. This technology is slower and clunkier than TAR, and doesn’t come with a hands-free option. Since TAR is a headset, the GPS location technology appears right in the view screen. And soldiers won’t have to worry about geo-registering their location; TAR does that automatically for them.

The visuals of TAR are equally impressive; the eyepiece connects wirelessly to a tablet, which soldiers can affix to their waist. It’s also connected wirelessly to a thermal sight which is mounted on the soldier’s rifle or carbine. This allows the soldier to take a map and lay it over whatever they are looking at. TAR provides them with detailed images as well as vital information on the target.

Since the soldiers are wirelessly connected, they can share this data (as well as visuals) with members of the squad. By providing this information to all members of the unit, the Army hopes that soldiers will be better equipped as a whole to deal with whatever unexpected events that may cross their paths.

Engineers are currently working on perfecting the visual aspects of TAR, so that mass production for the troops can begin. Soon soldiers will be able to enjoy a previously unknown level of situational awareness which could very well end up saving countless lives. 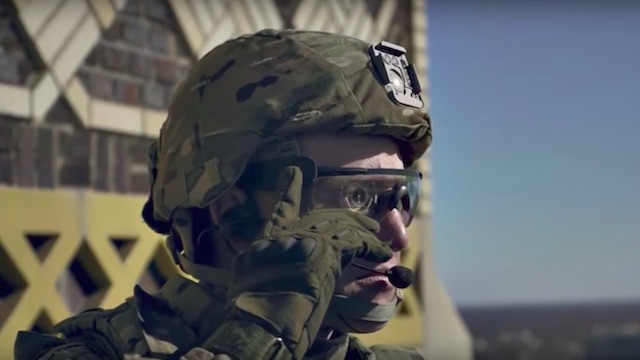