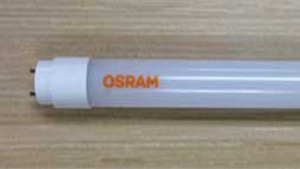 Osram Sylvania and the CPSC have announced a voluntary recall of SubstiTUBE IS T8 LED lamps because a manufacturing defect has caused a burn hazard. A missing component on the electrical connection between two internal printed circuit boards (PCB) may cause the lamps to overheat and melt. Osram Sylvania Inc. has received 34 reports of overheating and melting, but no injuries have been reported.

As a result, the company is recalling approximately 46,300 units in the U.S. (plus 8,700 that were sold in Canada). The recalled LED lamps were sold at Osram Sylvania industrial/commercial distributors between December 2014 and May 2015. They are white, cylindrical, and measure 4 feet long and 1 inch in diameter. “OSRAM SubtiTUBE® IS LED T8” is printed on a silver label attached to the end of lamps, and model number 73312-1 or 73315-1 appears on the label beneath the statement “Compatible LED T8 for use with instant start T8 electronic ballasts.”

Owners should immediately stop using the affected lamps, switch off and disconnect the lamps, and store them in a safe place. Osram Sylvania will replace the lamps for free.