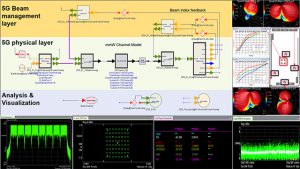 Keysight Technologies, Inc. has announced that its premier simulation platform for system design and verification, SystemVue 2017, significantly contributed to an improvement to the narrowband internet of things (NB-IoT) standard. SystemVue enables users to combine existing baseband, RF, and channel models together for evaluation of the entire system. The improvement realized using SystemVue, optimizes the NB-IoT user equipment (UE) standard to facilitate the implementation of low-power NB-IoT terminal chips and will be incorporated in Release 13 (revised version) and 14 of the 3GPP standard.

While designing an NB-IoT terminal transceiver, experts from Hong Kong Applied Science, and Technology Research Institute (ASTRI) discovered an improper definition in the NB-IoT standard’s receiver wideband intermodulation requirement. The requirement was more stringently specified than that in the LTE standard, which runs counter to the promise of offering low-cost/low-power NB-IoT terminals.

A system-level simulation platform, based on Keysight EEs of EDA’s SystemVue software and NB-IoT library (developed in collaboration with ASTRI), provided the critical evidence needed for ASTRI to successfully request a standard change at the 3GPP RAN4 #82 meeting in Athens, Greece in February. The change was fully accepted by delegates from many different companies.

“As an early and active participant in 3GPP NB-IoT standardization, ASTRI is pioneering development of NB-IoT terminal transceiver IP for the worldwide market,” said Tom Lillig, general manager for Keysight’s Design Engineer Software organization. “SystemVue software has, and continues to play, a critical role in that development by providing ASTRI the capabilities it needs to fully evaluate its transceiver IP at the system level. Without such capabilities, issues like the improper NB-IoT standard definition could have easily be overlooked, detrimentally impacting the standard’s use and proliferation.”