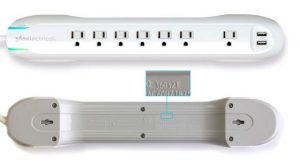 360 Electrical is recalling its surge protectors because they can short circuit when non-grounded plugs are connected, posing a shock or fire hazard. The surge protectors were made in China and sold at B&H Photo stores nationwide and online at Amazon.com and bhphotovideo.com from July 2015 through February 2016 for between $33 and $40.

The recall includes approximately 9,300 units (plus about 1,000 in Canada). Three models of surge protectors are included: Idealist (360320), Idealist 2.4 (360321) and Agent (360322). The model number is located on the underside of the unit. The units have seven outlets, come in black or white, measure 14.5 inches long, and have “360electrical” printed on the front. Recalled surge protectors do not have a single check mark engraved on the underside of the unit, right next to the model number.

Consumers should immediately stop using the recalled surge protectors and contact 360 Electrical for a free replacement.