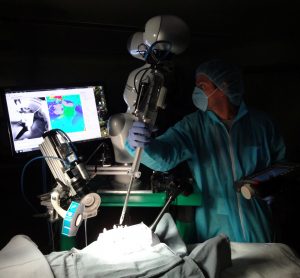 For the first time, a supervised autonomous robot has performed soft tissue surgery on a live patient. Although autonomous robots have previously performed surgery on rigid anatomy, such as bones, soft tissue surgery can be more complicated so it has remained manual. During surgery, soft tissue often moves in unpredictable ways, and surgeons have to respond by making constant adjustments. Now a new robot called the Smart Tissue Autonomous Robot (STAR) used advanced sensing technology and algorithms to perform the surgery without requiring a doctor’s hands.

Surgeons and scientists at Children’s National Health System in Washington, DC developed STAR to demonstrate that robotic surgery for soft tissue is not only possible, but it also outperforms traditional surgical techniques. The robot is able to track tissues in motion because it is equipped with near infrared fluorescent markers and 3D plenoptic vision, which captures the light field to provide 2D images of a scene. It also uses force sensing, submillimeter positioning, and actuated surgical tools. STAR uses an algorithm to guide the plan for the surgery and autonomously make adjustments in response to any moving tissue.

Our results demonstrate the potential for autonomous robots to improve the efficacy, consistency, functional outcome and accessibility of surgical techniques. The intent of this demonstration is not to replace surgeons, but to expand human capacity and capability through enhanced vision, dexterity, and complementary machine intelligence for improved surgical outcomes.

To prove the robot’s abilities, STAR performed a common surgery called intestinal anastomosis on living pigs. All of the pigs survived the surgery, and the results were measurably superior to a control procedure that was performed manually by an experienced surgeon. Now that supervised, autonomous robotic surgery has been proven to be effective, more work will need to be done in order to improve sensors and miniaturize surgical tools. Dr. Kim predicts that some or all of the technology could be used in clinical settings within the next two years.