Superconductive Skin to Provide Robots with a Sense of Touch 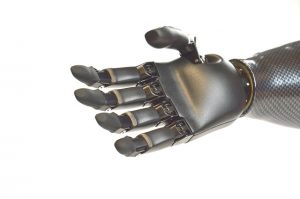 Scientists from the University of Houston have engineered a new type of artificial skin. This skin will allow robots to sense changes in temperature from hot to cold. Although it is still in the early stages of development, this innovation promises a host of exciting developments in the medical research field.

There are a number of potential future uses for this discovery. More sensitive surgical gloves and health monitors are just the tip of the iceberg; with further work and research, scientists believe they could create prosthetics that would actually have the capability to ‘feel.’

The skin is superconductive, which is a feat in and of itself. In fact, most semiconductors are extremely stiff and difficult to stretch; this artificial skin is being touted as “the first semiconductor in rubber composite format that enables stretchability without any special mechanical structure,” according to Assistant Professor of mechanical engineering Cunjiang Yu.

The skin is created with a silicon-based polymer called polydimethylsiloxane (PMDS). It is combined with a hardened material constructed from small nanowires. This makes the skin capable of transporting an electrical current.

To test the effectiveness of this new artificial skin, a robotic hand was covered in the material. From there it showed that the hand was able to ‘feel’ the difference between icy and hot water. A second test showed the hand receiving computer signals, which the robot then translated into American Sign Language.

While these touch-sensitive robots are exciting, they are merely the beginning of what this material is capable of. Scientists are working to improve the stretchable qualities of the material, which could have useful applications in the field of wearable technologies — as well as the aforementioned medical tools and prosthetic development.