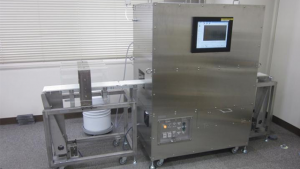 Researchers at Toyohashi University of Technology in Japan have come up with an unconventional way to detect metal contaminants in food. Dr. Saburo Tanaka and his team can detect even the tiniest metal fragments in food, using a system they built with a strong magnet, a triple-layered box, a digital filter, and three high-Tc RF superconducting quantum interference devices (SQUIDs).

SQUID is a high-sensitivity magnetic sensor that works when it is in a superconducting state, which requires very low temperatures. Therefore the system includes a constant stream of liquid nitrogen to keep the SQUIDs cool. The researchers apply a strong magnetic field to food to magnetize any metal fragments inside and then the SQUID sensors pick up any magnetic fields, signifying that the food is contaminated. The biggest challenge with this method is distinguishing between actual signals from the food and noise from other sources, such as nearby cell phones. Tiny shards of metal—which can be dangerous to consume—could easily be missed if they are drowned out by surrounding noise.

To solve this problem, the researchers placed the sensor inside a box made of 2 mm iron-nickel alloy plates, so that external magnetic fields are concentrated on the walls of the box, and the sensor only detects magnetic fields within the food that is being tested. To be sure that any possible interference is eliminated, Tanaka nested a total of three boxes over of the sensor. The system also includes a computer program that acts as a digital filter, using a technology called “moving-average processing” to attenuate any signals from noise so that the system only picks up metallic fields from within the food.

According to the researchers, the system is accurate even for food that is passing by at 65 feet per minute, the typical speed for food factories. They say the system is sensitive enough to identify metal contaminants as small as 300 microns, which is invisible to human eyes and smaller than existing X-Ray radiation inspection methods can detect.