Studying the impact of Aurora Borealis on Satellites

Sometime between now and January 27, weather depending, NASA will launch several unmanned rocket probes into the Alaskan sky to study the aurora borealis. The study will help scientists to understand how heat distribution in the upper atmosphere caused by auroras affects satellites in orb and global infrastructure.

The northern lights display occurs when charged particles from the sun collide with molecules in the Earth’s atmosphere. The energy causes molecules become excited and emit light. As Charles Swenson, a principal investigator on the team, describes, “Electric currents, driven by the solar wind when encountering Earth’s magnetic field, exist in and around the region where aurora occur. These invisible currents heat the thin air of the upper atmosphere of Earth through the Joule heating process.” The heating causes an expanded thermosphere which can increase satellite drag and shift a satellite’s orbital trajectory. 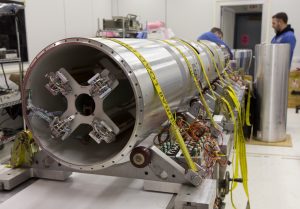 Auroral Spatial Structures Probe (ASSP) is one of five suborbital rockets planned for launch. ASSP will cruise through the lights and while airborne, using an air cannon, or “pumpkin’ chunker” as the research team prefers, it will fire off six probe payloads at a velocity of up to 131 feet per second. Each probe payload will collect data on electric and magnetic fields as well as ion density.

The measurements collected will help predict the location and time that the Earth’s thermosphere will be impacted by the joule heating process of the auroras and geomagnetic storms. This information allows defense departments and other companies to more accurately forecast satellite trajectories and course correct to avoid potential for satellite drag.