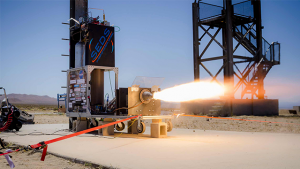 The school already has bragging rights from 2013, when they were the first university to successfully design, print and test a 3D-printed rocket engine. Now, the students want to use their 3D-printed engine to send a rocket 10,000 feet in the air, which would almost double the current record of 60 feet.

Charrier is part of the Students for the Exploration and Development of Space (SEDS), a nonprofit group that inspires students to contribute to the exploration and development of space. The UC San Diego chapter of SEDS successfully tested the latest version of their 3D printed rocket last month. The engine is made of a high-grade alloy. It weighs about ten pounds and is designed to generate 750 lbs of thrust. The tests were conducted at the FAR site, a 10-acre property in the Mojave Desert established by the Friends of Amateur Rocketry, Inc. to safely test and launch rockets.

After two failed attempts and some troubleshooting, the students adjusted the pressures in their test system and successfully tested the engine. Now that they have tested the engine, they will finish building the rocket just in time for the Experimental Sounding Rocket Association’s tenth annual Intercollegiate Engineering Rocket Competition from June 25 to 27 in Utah.