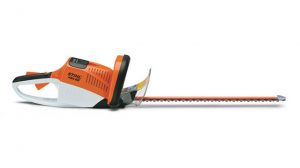 The recalled trimmers were made by VIKING GmbH in Austria and sold at authorized STIHL dealers nationwide from June 2010 through April 2016 for about $300. The recall includes model HSA 65 battery-powered hedge trimmers. They are gray and orange, with a loop handle, removable battery and a 20 inch hedge trimming blade.

Consumers should immediately stop using the recalled trimmer and return it to an authorized STIHL dealer for a free replacement battery-powered hedge trimmer.