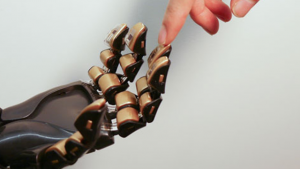 A team of Stanford University engineers has created artificial skin that can sense changes in pressure. The material could eventually be used to make prosthetic limbs that allow users to feel the objects they touch. This breakthrough is the culmination of a decade of research on flexible electronics. “This is the first time a flexible, skin-like material has been able to detect pressure and also transmit a signal to a component of the nervous system,” said lead researcher Zhenan Bao.

To create the artificial skin, Bao’s team of 17 engineers designed a two-ply plastic, with the first layer handling sensing and the bottom layer sending the signals to nerve cells. The top layer is made of billions carbon nanotubes—tiny cylinders of pure carbon that conduct electricity—distributed throughout waffled plastic. When pressure is applied, the nanotubes are squeezed closer together, which causes them to conduct electricity. Increasing or decreasing pressure changes the amount of electricity that flows. With this design, the material can sense pressure differences in the same range as human skin. For example, it knows the difference between a light tap (minimal electrical pulses) and a firm handshake (intense electrical activity).

The team then hooked this pressure-sensing mechanism to the second ply which includes, a flexible electronic circuit that could carry pulses of electricity to nerve cells. Bao’s team collaborated with researchers from PARC, a Xerox company, to use an inkjet printer to deposit the flexible circuits onto plastic. This allows the material to transmit pressure information just like human skin does— as short pulses of electricity to the brain.

To prove the concept, the Stanford team used optogenetics, which involves altering genes so they will react to light. The researchers bioengineered a line of neurons to make them sensitive to specific frequencies of light. Then they translated the electronic pressure signals from the artificial skin into light pulses, which activated the neurons. If the skin is used in real prosthetic devices in the future, other methods of stimulating nerves (such as direct stimulation with electrical pulses) would be used.

Ultimately, Bao and her team would like to develop additional sensors that can replicate the other biological sensing mechanisms in the human hand. By embedding more sensors, the prosthetic skin could not only sense pressure, but it could also feel different textures and temperatures. “We have a lot of work to take this from experimental to practical applications,” Bao said. “But after spending many years in this work, I now see a clear path where we can take our artificial skin.” The research was funded by the U.S. Department of Defense and is described in Science.