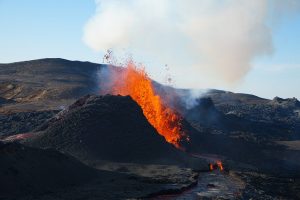 Image by Berdan Mardinly from Pixabay

Scientists at Stanford University have discovered enormous deposits of lithium in the United States. These large deposits are located in a most unexpected place: supervolcanoes. This discovery could help reduce America’s reliance on other countries for this much-needed energy source as we move forward with a variety of lithium-powered technologies.

“We’re going to have to use electric vehicles and large storage batteries to decrease our carbon footprint. It’s important to identify lithium resources in the U.S. so that our supply does not rely on single companies or countries in a way that makes us subject to economic or political manipulation.”

Supervolcanoes appear as huge holes in the ground, instead of the traditional cone shape normally associate with volcanoes. They can also be up to 10,000 times more powerful than regular ones. When they’re not spurting mama and ash, these holes often end up filling with water and forming lakes. These special lakes leach the lithium directly from the volcanic deposits. This results in an enormous natural lithium resource, just waiting to be taken advantage of.

To uncover which supervolcanoes carried large deposits of lithium, scientists had to investigate the magma. Unfortunately, lithium is known for being an extremely volatile element that makes it difficult to measure. Luckily, researchers had come up with a solution to this particular problem. They studied small pieces of magma that had ended up trapped in crystals as they grew inside the magma chamber. Called ‘melt inclusions,’ these tiny chunks of magma remained intact regardless of the outside environment. This allowed them to record the original concentrations of numerous elements — including lithium. Scientists would then slice through the crystals to get at the magma within and study the respective lithium levels.

This technique has allowed researchers to determine which supervolcanoes have the largest deposits of lithium. Going forward, this will make it that much easier to uncover other supervolcanoes rich in lithium. Further work will streamline these efforts, as well as help scientists identify and record the original concentrations of a variety of other useful elements.