Spray On Antennas Open the Door to Smarter Technology

Researchers from Drexel’s College of Engineering have designed a new method for creating invisibly thin, flexible, and lightweight antennas. These antennas can be easily integrated with wearable devices, functional fabrics, and an assortment of other devices connected to the Internet of Things (IoT).

Using a two-dimensional metallic material known as MXene, scientists can easily spray these antennas onto any surface. According to scientists, these new antennas perform just as well as the ones currently being used in portable transducers, mobile devices, and wireless routers.

“This is a very exciting finding because there is a lot of potential for this type of technology. The ability to spray an antenna on a flexible substrate or make it optically transparent means that we could have a lot of new places to set up networks — there are new applications and new ways of collecting data that we can’t even imagine at the moment.”

Kapil Dandekar, PhD, a professor of Electrical and Computer Engineering in the College of Engineering, who directs the Drexel Wireless Systems Lab, and was a co-author of the research 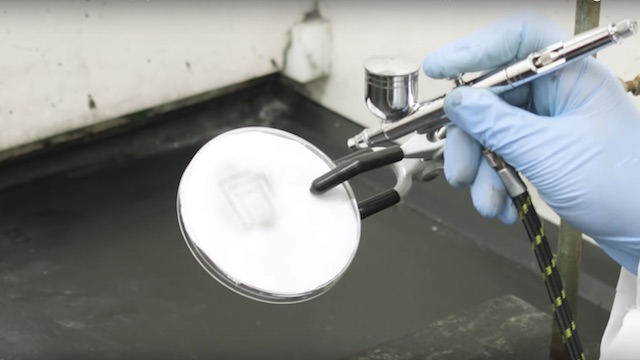 The MXene titanium carbide can be easily dissolved in water and then turned into an ink or paint. Due to the material’s superior conductivity, even a thin coating can transmit and direct radio waves. This means that even antennas that are a mere tens of nanometers thick can efficiently transmit and communicate. At 8 microns, the MXene antenna can reach 98% of its predicted maximum value.

During testing, scientists tried their sprayed antennas against a host of traditional ones. Typical antennas are made from gold, copper, silver, and aluminum; unfortunately, they are much thicker and heavier than the new MXene antennas. This design flaw made it extremely difficult to integrate the antenna technology into wearables and other flexible devices. And the results speak for themselves: when it comes to preserving the quality of radio wave transmission, MXene antennas proved to be 50 times better than those made with graphene and a whopping 300 times better than antennas made from silver ink.

Going forward, scientists will work on perfecting their spray paint antennas so they can be affixed to any sort of surface, including fabric, glass, and even human skin.