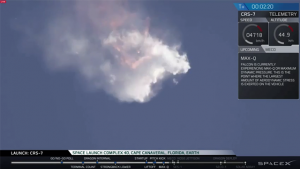 A resupply mission to the International Space Station (ISS) disintegrated after two minutes in the air. The SpaceX Falcon 9 rocket exploded after its launch from Cape Canaveral on Sunday morning. NASA hasn’t pinpointed the exact cause of the failure yet, but so far no negligence has been found. SpaceX founder Elon Musk updated the public in his usual way, via twitter. So far, it looks like the explosion was caused by an overpressure in the rocket’s upper stage liquid oxygen tank. In a press conference yesterday, Gwynne Shotwell, president and COO of SpaceX, reiterated that that all safety procedures were followed and despite the unanticipated explosion, there are no safety concerns.

Cause still unknown after several thousand engineering-hours of review. Now parsing data with a hex editor to recover final milliseconds.

The explosion destroyed a Dragon cargo craft that was loaded with 5,200 pounds of cargo to resupply the ISS, such as space suit, a water filtration system, scientific experiments, and a docking adapter made by Boeing meant for future commercial aircraft to dock to the space station when they deliver crews in 2017. The cargo also included Microsoft Hololens virtual reality headsets. The collaboration between Microsoft and NASA called “Sidekick” involves bringing the latest hologram technology to space to provide virtual assistance to astronauts.

When it is delivered to the ISS, Hololens will operate in two different modes. In Remote Expert Mode, astronauts will use the headset to allow ground operators to see what they see so they can provide real-time guidance for tasks such as repairing equipment. Ground operators could even write notes, or “draw” on equipment in the ISS to help astronauts through a task. This first mode is great because it effectively brings additional people into the space station to help, but that kind of direct connection won’t always be available, especially on deep space missions such as the journey to Mars. Even when communication is lost or delayed, astronauts can still use Hololens to project holographic illustrations on top of objects. This “Procedure Mode” would help reduce the amount of training required because the system could store instructions for various tasks and scenarios. Hololens has been tested in NASA’s Weightless Wonder C9 jet to confirm that it will work in the low gravity setting at the ISS.

While the rocket failure certainly caused a loss of financial and scientific resources, it is ultimately just the cost of risky spaceflight. Bill Gerstenmaier, NASA’s head of spaceflight, said an occasional failure should be expected. He said the demanding environment, requires “tremendous precision and tremendous amount of engineering skill and hardware to perform exactly as it should.” Fortunately, the damage won’t change any plans for the astronauts who are already living on the ISS or those who are planning to head to space on July 23.