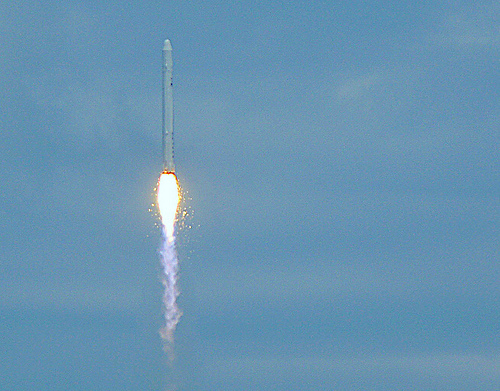 SpaceX will launch its Falcon 9 rocket from Cape Canaveral in Florida to send Dragon a capsule to deliver supplies to the International Space Station. Yesterday’s launch was scrubbed due to weather, and is now rescheduled for today, Tuesday (April 14) at 4:10 p.m. Shortly after launch, engineers will attempt to land a used rocket so that the expensive equipment can be salvaged for future missions.

Falcon 9 is made up of two stages. The first part will carry the craft 50 miles into the sky before separating and falling back to Earth within half an hour after takeoff. Engineers will attempt to retrieve the first stage rocket by landing it on a barge that is floating in the Atlantic Ocean. Steerable fins will help guide the rocket and slow it down, and as it nears the barge a set of legs will unfold. The plan is to slow the rocket down to just 4.5 miles per hour before it lands in an upright position on the barge.

It is a tricky maneuver that has not yet been perfected. A previous attempt in January ended with an explosion as it crashed into barge because of a shortage of hydraulic fluid. This time Falcon 9 will carry more hydraulic fluid in order to avoid another crash. Despite the challenges, reusing rockets is a worthy pursuit that could reduce the cost of space travel—building a new Falcon 9 costs $54 million, according to SpaceX. Rockets are usually discarded after just one use as they break into pieces as they fall back to Earth and then sink deep into the ocean. Watch the launch live.