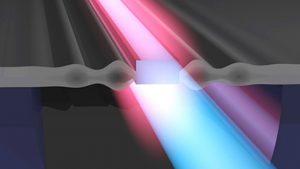 Silicon microchips just got a boost from the power of sound. A team of Yale scientists developed a new waveguide system that can precisely control the way that light and sound waves interact on a chip. This innovation could become the foundation for new lasers, fiber-optic communications, and signal processing technologies. The accomplishment was achieved by a research team led by Yale professor Peter Rakich. “Silicon is the basis for practically all microchip technologies,” he said. “The ability to combine both light and sound in silicon permits us to control and process information in new ways that weren’t otherwise possible.”

Other research groups have attempted to combine light and sound to improve silicon chips, but their devices weren’t efficient enough to be practical. The Yale scientists developed new efficient designs that prevent light and sound from escaping the circuits. “Figuring out how to shape this interaction without losing amplification was the real challenge,” said Eric Kittlaus, the first author of a paper about the study that published in the journal Nature Photonics. “With precise control over the light-sound interaction, we will be able to create devices with immediate practical uses, including new types of lasers.”