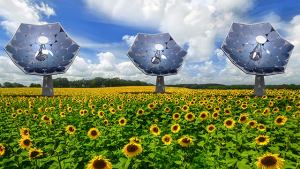 It sounds quite picturesque, if not a bit cliché: a field in Switzerland covered in giant sunflowers. But what if the flowers were actually using sunshine to generate electricity and hot water? A Swiss company called Airlight Energy, along with its subsidiary, Dsolar, has built the solar sunflowers with help from IBM Research. The project combines both photovoltaic (solar) power and concentrated solar thermal power in one structure, with a total efficiency of about 80 percent.

The solar sunflowers use technology called “highly efficient concentrated photovoltaic/thermal” (HCPVT) to concentrate energy equivalent to approximately 5,000 suns. The structure is made of lightweight concrete pieces, which are covered in aluminum reflectors for concentration and collectors, with an array of photovoltaic cells, that convert the energy into electricity. Unlike typical solar cells, which are made of silicon, these are made of gallium-arsenide (GaAs), which is more efficient and much more expensive. Despite its hefty price tag, GaAs is the right material for the job; a collector that measures just a few square centimeters can produce about 2 kilowatts of electricity.

Engineers were faced with a challenge: concentrated solar power gets so hot that the metallic flower would become self-destructive, by heating itself so much that it melts. To avoid this problem, they used an advanced cooling system that IBM recently developed for cooling transistors in supercomputers. Conventional liquid cooling involves a water block—a piece of metal with channels for liquid (e.g. water) to flow through. Heat then transfers from a computer chip to the liquid and is carried to a radiator and released into the atmosphere. Instead, IBM’s new system keeps the hot water and uses it for heating and other industrial applications. The new system is also different because the water block is replaced with a piece of silicon with thousands of miniature channels to bring the water as close as possible to the transistors. The very same hot-water cooling devices were applied to back of the back of the sunflower’s solar cells. With this improvement, the sunflower is able to concentrate solar energy to produce about 12kW of electricity and 21kW of thermal energy without melting itself.

Still, there are several catches. The solar sunflowers lack energy density, they only work in direct sunlight, and they are way too expensive to compete with standard silicon photovoltaics. However, the technology is innovative and physically attractive, so solar sunflowers could be the right fit for certain customers. Airlight Energy is planning to start selling to early adopters in 2016, and then start manufacturing on the commercial scale 2017.