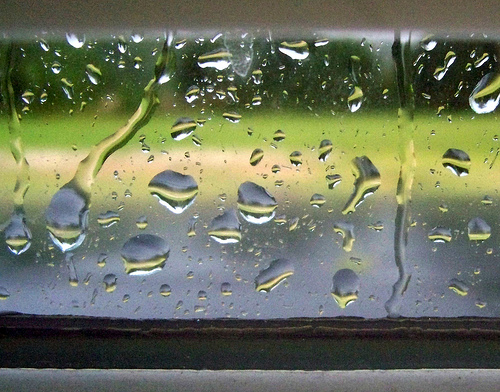 April showers could bring…more power. Researchers at the Georgia Institute of Technology have invented self-powered glass that harvests energy from wind and rain. The window uses triboelectric energy, which is based on the coupling effect of contact electrification and electrostatic induction, in other words, the static electricity that is produced by friction when two materials touch.

To create the window, the Georgia Tech team integrated electrochromatic glass with a transparent triboelectric nanogenerator to convert ambient mechanical energy from the weather into power. When activated, the generators create an electrical current that tints the glass blue. The glass is made of several layers that each accomplish different goals.

The outer layer harvests energy from rain. When a rain drop falls from a cloud, the contact between the water and air creates a positive charge in the droplet. When a raindrop hits the glass it creates an electric current when the droplet’s positive charge reacts with the outer layer of the glass, which is coated with a negatively charged silicone material called polydimethylsiloxane.

Below the first layer, a second layer collects energy from the wind. It includes two sheets of charged, see-through plastic that are separated by nanoscopic spring coils. When wind pushes against the window, the springs compress and the charged plastic plates are pushed toward each other, which creates an electric current.

In a paper that is freely available in ASC Nano, the researchers describe experiments in which the glass produced up to 130 milliwatts per square meter. This is enough to power a pacemaker or a smartphone in sleep mode. In the paper, the researchers wrote, “This research presents a substantial advancement in the practical applications of nanogenerators and self-powered systems, which will initiate promising improvements in self-powered flexible displays, wearable electronics, and energy efficient buildings.”