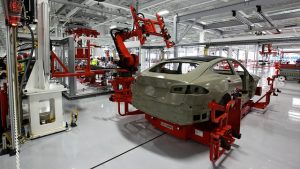 Robots are a staple for many large manufacturing plants, and now smart robots—in other words, artificial intelligence systems, are becoming increasingly more common. These intelligent robots can learn from their experience and even collaborate with humans, working right alongside them on production lines. However, smart robots aren’t typically used for small production runs, because the initial cost and set-up time does not make economic sense for small or medium sized manufacturers.

A new system developed by a Dutch and German partnership called SInBot takes a new approach to make flexible, multi-purpose robots for small-scale production. While traditional manufacturing robots follow a set of instructions, the new robots take a heterarchical approach, in which they discuss what they are going to do next, and then the robots assign and execute tasks individually, while being aware of each other’s locations and activities. Ten Dutch and German companies and research institutes are working together on six main aspects of a smart robot system: sensors, intelligence, mobility, communication, safety, and the robot platform itself.

Haake Technik, a German safety technology company, has been assessing and grading the risks of injury associated with the interaction between people and robots. In particular, they have been testing a sensor that will ensure that the robots will maintain a minimum distance away from any person. Other partners developed sensors that use speed and ultrasound to determine a robot’s position. A company called Xsens, for example, made a sensor that works perfectly, even when it is exposed to the strong vibrations and temperature variations that a robot would encounter on a typical factory floor. Researchers at the University of Groningen have been working on how autonomous robots can collaborate with each other, especially how a team of small robots could do the work of one large robot, but with more flexibility. The University of Twente developed software for intelligently controlling robots within medium-sized industrial enterprises.

Maarten Essers, a doctoral candidate at the University of Twente in the Netherlands, conducted research into improving control of industrial robotic arms as part of the SInBot project. He concludes:

Factories will get a complete overhaul in the near future, especially with respect to small and medium enterprises. Smart factories will pop up everywhere and small-scale production will become completely automated with the help of self-learning smart robots. They will be used in the food, feed and metal industries as well as in other manufacturing sectors. It will also be much easier to quickly switch between parts of major production lines in the petrochemical industry, for example. It will have a major impact on Dutch industry and will pave the way for a Smart Industry. [Emphasis added.]