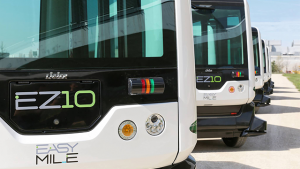 Driverless shuttles are coming to a San Francisco suburb next summer. In a pilot project that will launch in 2016, two autonomous vehicles will be tested in an office park. The vehicles are made by EasyMile, a French company that is a joint venture between a vehicle manufacturer and a robotics firm. The shuttles are already deployed in Finland, France, Italy, Spain and Switzerland, but this will be the first time they hit American roads.

The autonomous vehicles will run in a Silicon Valley office park that is home to AT&T, Chevron, and General Electric. “This technology offers an innovative, new approach to helping travelers get to transit stations, business districts and other local amenities without the hassle of driving and parking, which could be a replicable solution for many urban and suburban communities” said local transportation official Randell Iwasaki.

The shuttles use vision, laser, and differential GPS to drive on virtual tracks. They are connected—both to other vehicles and to infrastructure (V2V and V2I). EasyMile says the vehicles are equipped with safety features such as redundant embedded systems inspired by aeronautics. Although they don’t have drivers, the shuttles will be managed by humans via fleet management software, which provides real time monitoring and control, as well as the ability to change the virtual track, as needed.