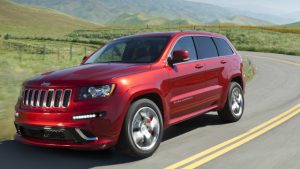 For the second time, Chrysler is recalling model year 2011-2016 Jeep Grand Cherokees and Dodge Durangos because the wiring in the sun visors can pose a fire risk. A total of 388,504 vehicles will be recalled on a date that has not yet been announced. Some of these vehicles were already recalled in 2014 for the same electrical problem, but there have since been eight reports of the sun visors smoking and catching on fire, even after they had been repaired.

Subsequently, a federal investigation concluded that the previous remedy did not completely resolve the issue.  Apparently, the fires are starting because manufacturing defects can cause the vanity lamp’s wiring to short. Specifically, screws that are used to mount the sun visor to the vehicle can accidentally pierce the vanity lamp’s wiring and cause an electrical short. Chrysler will notify owners, and a remedy plan is still being developed.