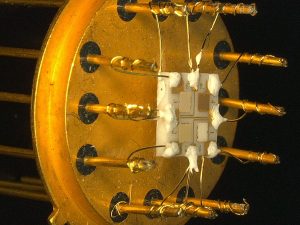 A team of German researchers developed a sensor that can detect a cable fire before there is any noticeable smell or discoloration. The so-called hybrid sensor has the ability to both detect and analyze gases that can indicate a fire hazard. The sensor detects certain plastic vapors that are released when insulating cables overheat, and it uses algorithms to analyze this data. Researcher Dr. Hubert Keller explains, “The combination of a smart evaluation process with physical measurement is the basic idea of this development.”

The researchers, from the Karlsruher Institut für Technologie and Karlsruhe University of Applied Sciences, published their findings in a recent issue of Sensors & Transducers Journal. The sensor has four areas with different metal oxides that change their electrical resistance when they come into contact with certain gases. The device uses these specific conductance signatures to identify the early stages of a cable fire.

The sensors are primarily aimed at increasing safety in electrical cables, but a similar approach could also be used to detect toxic gases in other applications, such as food safety, natural gas pipelines, or in fertilizer silos. “Hybrid sensors can be used anywhere as separate systems or in a network. They may also be combined with classical safety technology, such as infrared cameras,” Keller says.