Self-Sustaining Robot will Swim Through Europa 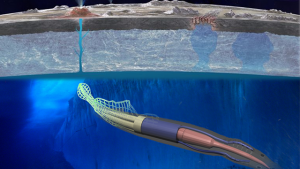 A Cornell engineering team is developing a self-sustaining, swimming robot to explore the harsh conditions of other planets. The team, led by Mason Peck and Rob Shepherd, of Cornell’s mechanical and aerospace engineering department, received a nine-month, $100,000 starter grant from NASA for the project. The grant is one of 15 awarded through NASA’s Innovative Advanced Concepts (NIAC), a program that “aims to turn science fiction into science fact through the development of pioneering technologies.” If initial studies are successful the team will be eligible for $500,000 of additional funding to further develop the concept.

The proposed robot would explore the oceans of Jupiter’s moon Europa. It would move like a lamprey—a parasitic fish that swims like an eel. “This robotic concept is inspired by terrestrial biology, and may help us understand how creatures in an environment like Europa’s ocean could gather energy to sustain life,” Peck said. The robot would have electrodynamic tentacles to harvest power by electrolyzing water and storing hydrogen and oxygen gas onboard. Then, the gases could be mixed on demand and ignited by a spark to propel the robot by inflating and deflating its body. The robot would therefore be powered solely by resources found in the extraterrestrial environment, and would not require any traditional nuclear or solar power. As if a self-sustaining, slithering space robot weren’t cool enough, the Cornell team also plans to cover the robot’s body with a stretchy, electroluminescent skin to light up the environment to enable underwater imaging.