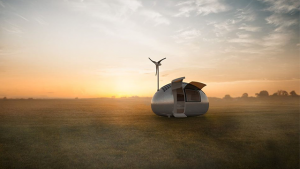 A Slovakian company has designed an independent micro-home that is powered entirely by solar and wind energy. The portable living spaces, called Ecocapsules, squeeze a bed, kitchen, and bathroom (with a compostable toilet, of course) into an 86 square foot pod. To power the home, the roof is covered with 600W solar cells, and a silent 750 W wind turbine attached to a retractable pole. An on-board battery stores the energy so that power is available in any weather. The home also captures and filters rainwater and dew for clean drinking water.

The company, Nice Architects, says that Ecocapsules can be deployed anywhere, so they can be used as emergency housing, research huts, or as humanitarian aid hubs. But we think it’s more likely to be used by people who are part of the growing tiny house movement, a social trend to downsize living spaces because of environmental or financial concerns and a desire for simplicity.

Pricing hasn’t yet been announced, but it will cost approximately $2,400 to ship one micro-home to New York. Nice Architects will unveil the first Ecocapsule to the public at the Pioneers Festival in Vienna this week, and although they aren’t accepting preorders until later this year, the company has already been flooded with email requests for more information.