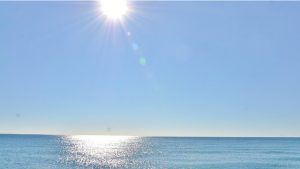 A new development in renewable energy takes advantage of two abundant resources: sunlight and seawater. Researchers at Osaka University have demonstrated a solar cell that efficiently produces hydrogen peroxide (H2O2) to be used to created electricity in fuel cells. H2O2 is much easier store and transport at high densities than the hydrogen gas that is typically used in fuel cells.

Despite this advantage, H2O2 has not been used because it has been difficult to produce. Some methods require too much energy, and other attempts at using sunlight haven’t been efficient enough. The Osaka team created a photoelectrochemical cell that produced higher concentrations of H2O2 in seawater than ever before. When sunlight hits the cell, a photocatalyst absorbs photons and uses the energy to make a chemical reaction (specifically, oxidation-reduction) that transforms water (H2O) into H2O2. The researchers discovered that chlorine in seawater helped enhance the photocatalytic activity and led to the unusually high concentration of H2O2.

Their cell has a solar-to-electricity efficiency of 0.28 percent, but the researchers are confident that this can be improved by using different materials. The study is described in a paper, “Seawater usable for production and consumption of hydrogen peroxide as a solar fuel,” which published in Nature Communications in May 2016.