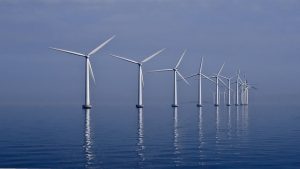 It’s been a banner year for renewable energy in Scotland. In January, a report showed that clean energy had become the country’s largest power source, producing almost triple the amount of energy of nuclear, coal, or gas. Now, the Scottish government is closing out the year with plans to install the world’s largest floating offshore wind development. This should put the country well on its way to reaching a goal of 100 percent renewable energy by 2020.

Norwegian energy firm Statoil will install a pilot park of five floating six megawatt turbines 15.5 miles off Scotland’s coast. Statoil’s Hywind concept consists of a wind turbine placed on top of a ballasted steel cylinder. Unlike conventional turbines, these turbines will be attached to the seabed by a three-point mooring spread and anchoring system. They will be connected by an array of cables and an export cable will transport electricity from the offshore pilot park to land. The park is expected to generate as much as 135 GWh of electricity each year, which is enough to power 19,900 homes.

The momentum is building around the potential for floating offshore wind technology to unlock deeper water sites. The ability to leverage existing infrastructure and supply chain capabilities from the offshore oil and gas industry create the ideal conditions to position Scotland as a world leader in floating wind technology.