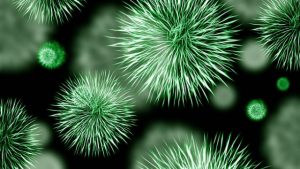 Power from sustainable resources could one day be stored in batteries that are also made from a renewable resource. A research group from The Netherlands has proven that it is possible to make an inexpensive rechargeable battery that is powered by bacteria. Although their bacteria-based battery is far from perfect, the researchers say that it could be optimized to eventually compete with conventional energy storage technology such as popular lithium-ion batteries.

The new battery combines two technologies in one system. Part of the system is a microbial fuel cell, which produces electricity from chemicals by mimicking bacterial interactions found in nature. The other half uses microbial electrosynthesis, in which electricity is converted back into chemicals to be reused in the battery.

This hybrid system could be used for energy storage for solar or wind power, so that sustainable sources could provide electricity on demand, day and night. The researchers, who are from the Wageningen University and Wetsus, tested the battery by mimicking a typical schedule for a solar cell—16 hours of charging time produced 8 hours of power. Their work is described in a paper called “Microbial Rechargeable Battery: Energy Storage and Recovery through Acetate,” which published in Environmental Science & Technology Letters.