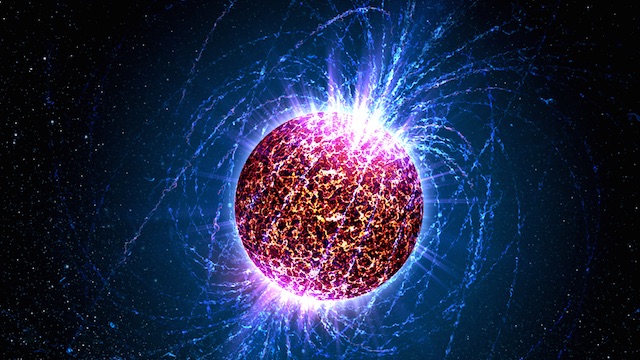 The scientists were aided in no small part by some serious pieces of technology: the US-based Laser Interferometer Gravitational-Wave Observatory (LIGO), the Virgo detector from Europe, and roughly 70 additional observatories all had a hand in the discovery.

A neutron star is the smallest and densest star in existence. The stars are formed when much larger stars explode into supernovas. These particular neutron stars spiraled together, emitting massive gravitational waves. These waves were detectable for about 100 seconds. As the stars collided, gamma rays were emitted; these rays were visible in the form of light back here on Earth, where scientists could detect them for roughly two seconds.

For days and weeks after the initial collision, there was more fallout. Electromagnetic radiation was detected in a plethora of forms, including optical, infrared, ultraviolet, X-ray, and radio waves. Thanks to the available equipment, scientists have been able to study the neutron star collision in depth. A few long-standing scientific mysteries have even been solved.

“It is tremendously exciting to experience a rare event that transforms our understanding of the workings of the universe. This discovery realizes a long-standing goal many of us have had, that is, to simultaneously observe rare cosmic events using both traditional as well as gravitational-wave observatories. Only through NSF’s four-decade investment in gravitational-wave observatories, coupled with telescopes that observe from radio to gamma-ray wavelengths, are we able to expand our opportunities to detect new cosmic phenomena and piece together a fresh narrative of the physics of stars in their death throes.”

France A. Córdova, director of the National Science Foundation

The collision may be over, but for the scientists work is just getting started. Now they have to sort through and analyze the monumental piles of information they’ve compiled. Additionally, they will continue to investigate the afterglow of the neutron star collision. This will provide invaluable insights into not only the collision itself, but what happens to its surroundings in the aftermath.