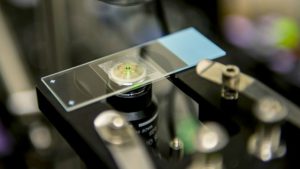 Freeze rays aren’t just fictional weapons anymore, now that researchers at the University of Washington used a laser to cool liquids for the first time in history. While lasers are better known for their ability to heat, they can also be used to refrigerate. Laser cooling was first demonstrated 20 years ago, but this is the first time it has been done with a liquid. “Typically, when you go to the movies and see Star Wars laser blasters, they heat things up. This is the first example of a laser beam that will refrigerate liquids like water under everyday conditions,” said researcher Peter Pauzauskie. “It was really an open question as to whether this could be done because normally water warms when illuminated.”

Pauzauskie and a team of researchers achieved this by suspending a single nanocrystal in water and zapping it with infrared laser light. The process produced a unique kind of glow that has slightly more energy than the amount of light absorbed. This higher-energy glow carries heat away from both the crystal and the water surrounding it. As a bonus, the researchers designed the crystal so that temperature changes could be easily observed; for example, it turns into a reddish-green color as it cools. Researcher Paden Roder said, “The real challenge of the project was building an instrument and devising a method capable of determining the temperature of these nanocrystals using signatures of the same light that was used to trap them.”

Now that it has been demonstrated, this breakthrough could lead to exciting improvements in computing and biology. A laser beam could be used to precisely cool parts of computer chips to prevent overheating and allow more efficient processing. Lasers could also cool a cell as it divides or repairs itself, so that scientists can observe these processes in slow motion.