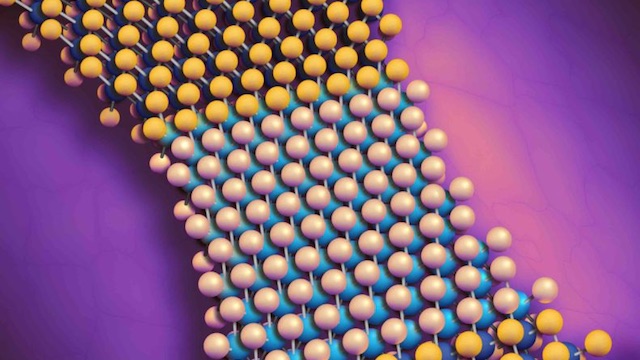 Scientists from the University of Rochester have developed a new way to push the limits of 2D materials and gain a better understanding of their potential capabilities. They combined 2D materials with oxide materials in a novel new way that could have important implications for the fields of electronics, computing, and optics — to name a few.

If the voltage is turned off, the material will retain its phase — at least, until the application of an opposite polarity voltage is applied. This will cause the material to return to its original phase.

“The ultimate goal of two-dimensional straintronics is to take all of the things that you couldn’t control before, like the topological, superconducting, magnetic, and optical properties of these materials, and now be able to control them, just by stretching the material on a chip.”

The platform constructed for this experiment includes the 2D material molybdenum ditelluride. As the material is stretched and then relaxed, it changes from a low conductivity semiconductor material into a semi-metallic material that is highly conductive. The secret is the voltage of the third terminal, which causes the 2D material to stretch a little in one direction, which allows it to conduct power.

The experiment proved successful at room temperature, and the 2D material only needed a small amount of strain in order to show results. In fact, scientists saw changes when stretching the material by a mere 0.4 percent.

Scientists are hopeful that this technology could potentially help them to counteract Moore’s Law, which predicts that the number of transistors found in a circuit will double every two years — and technology is rapidly nearing how far down transistors can be scaled in size. Researchers believe this platform could potentially perform the same functions as a transistor while requiring far less power.

Extensive research will be required before they achieve this goal, but with the first demonstration proving a success, researchers are optimistic about the future of this technology.