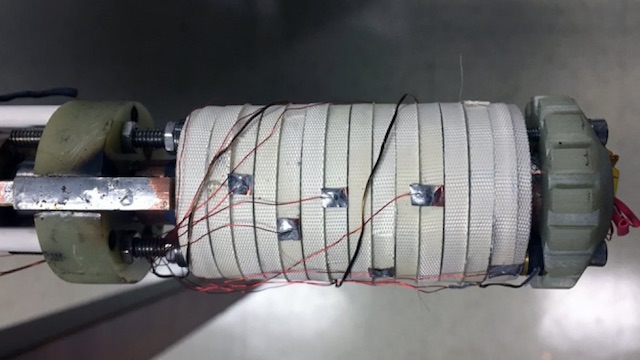 Researchers at the National High Magnetic Field Laboratory located in Florida have created a high-temperature superconductor magnet capable of generating 45.5 Tesla — the first time this measurement has ever been achieved. Scientists believe this is the first step in creating a whole new type of magnet technology that could lead to a better understanding of a variety of applications, including nuclear fusion and interplanetary rockets.

The new magnet relies on a high-temperature superconducting material. This material is then chilled to the levels of the liquid nitrogen that traditional superconductors rely on. As the superconductor is cooled below the temperature at which it loses electrical resistivity — know as its critical temperature — its ability to handle higher currents grows. This allows it to achieve higher magnetic fields, and ultimately reach 45.5 Tesla.

Typically, superconductors cannot withstand magnetic fields beyond 30 Telsa. The electrons that allow it to maintain its quantum superconducting properties become too unstable at that level, causing the superconductor to lose the properties that make it zero-resistant. Not so for the new model, thanks to the liquid helium that actually enhances its superconductivity.

Another factor that aids in the ability of the magnet to withstand the added Tesla is its insulation — or lack thereof. In traditional electromagnets, there is a layer of electrical insulation inserted between the superconducting tape. Not so with the new magnet; instead, scientists took non-insulated tape and applied multiple layers to their creation. These layers operate similarly to a single-layered thick superconductor, allowing the electron pairs to avoid any impurities in the insulation, which in turn allows the magnet to handle even stronger fields.

While this is a record-breaking achievement, the scientists behind the magnet aren’t content to rest on their laurels. Instead, they have their eyes on an even loftier goal — reaching 50 Teslas of field strength. In fact, some of the researchers on the team are convinced that their new breed of superconductors could one day even achieve 60 Teslas. But for now, much more research and experimentation on the superconductors and their insulation will be required. Until that time, the scientists will continue to investigate the intricacies of the new magnet and superconductor, and work to understand how these principles could provide us with far greater magnetic fields than ever before.