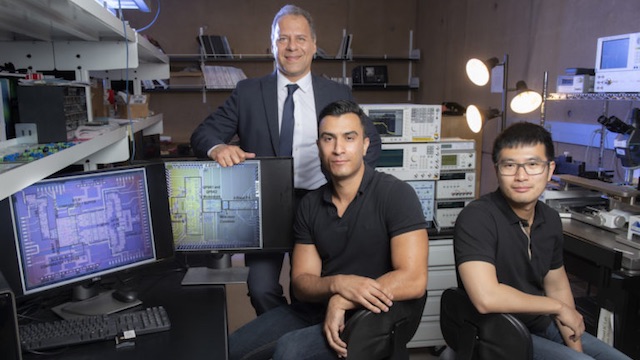 Electrical engineers from the University of California Irvine are in the process of developing a new type of wireless transceiver that could conceivably leave the 5G network in the dust. They believe their new ‘end-to-end transmitter-receiver’ will be able to boost radio frequencies all the way into 100-gigahertz territory. That’s nearly four times the speed of standard 5G wireless communications — and scientists are eager to make this idea a reality.

The wireless transceiver is constructed from a 4.4-millimeter-square silicon chip. This chip can process digital signals faster and more energy-efficiently than current iterations, in large part due to its digital-analog design.

“We call our chip ‘beyond 5G’ because the combined speed and data rate that we can achieve is two orders of magnitude higher than the capability of the new wireless standard. In addition, operating in a higher frequency means that you and I and everyone else can be given a bigger chunk of the bandwidth offered by carriers.”

However, this effort has not been without its complications and drawbacks. Scientists have been forced to work around Moore’s Law, which has long posed a problem for engineers. In order to overcome this issue, researchers used a chip that modulated the digital bits in the analog as well as the radio-frequency domains. This helped to relax the digital processing requirements, allowing the chip to operate at lightning-fast speeds.

The transceiver’s unique design has another advantage: it consumes significantly less energy than current systems. Additionally, it can be fabricated at a far lower cost, indicating it could have significant appeal in the commercial market.

Scientists believe there are numerous potential applications for this new technology. When combined with phased array systems, the technology could be used for communication as well as wireless data transfer applications.  The technology could, in theory, eliminate the need for fiber-optic cables, providing data farm operators with the ability to transfer data quickly and easily — and saving a lot of money in the process.

However, the idea of wireless data farms is still far in the future. For now, scientists are still hard at work developing and streamlining this technology. Should further research prove successful, they intend to investigate options for commercialization of their invention.