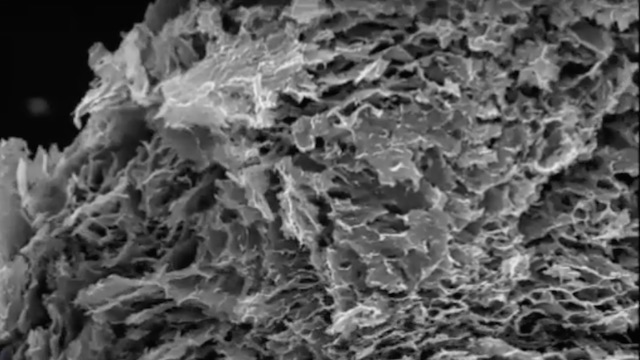 Scientists from China and the United States have worked together to create a new type of metamaterial. This man-made material is super-elastic, flame-resistant, featherweight, and incredibly strong. Its many attributes have led experts to believe it has virtually countless applications in fields as varied as construction to aerospace technology.

The new metamaterial is made up of nanolayers of a unique ceramic. The ceramic is called aluminum oxide and is mixed with an extremely thin layer of carbon called graphene. These two materials are each extremely brittle on their own; however when they are combined, the resulting metamaterial has a special honeycomb structure. This peculiar structure is where the metamaterial gets its impressive strength from.

The metamaterial has more than mere strength going for it. While normally graphene deteriorates when it is exposed to high temperatures, the ceramic infuses it with both flame-resistance and heat tolerance. The resulting product is shock-absorbing, lightweight, strong, and flexible. As if that isn’t enough, it’s also an excellent thermal insulator while simultaneously having high electrical conductivity.

“Here, we report a multifunctional ceramic-graphene metamaterial with microstructure-derived super-elasticity and structural robustness. We achieved this by designing a hierarchical honeycomb microstructure assembled with multi-nanolayer cellular walls serving as basic elastic units. This metamaterial demonstrates a sequence of multifunctional properties simultaneously that have not been reported for ceramics and ceramics–matrix–composite structures.”

Gary Cheng, associate professor in the School of Industrial Engineering at Purdue University

The metamaterial was made thanks to work by scientists from Purdue University, Lanzhou University, the Habin Insitutre of Technology, and the United States Air Force Research Laboratory. The scientists believe that the versatility of this metamaterial — not to mention its varied attributes — could be useful in a wide range of fields. The metamaterial’s ability to withstand high temperatures could be effectively utilized as an aircraft heat shield. Because of its lightweight and flexible nature, it could be a powerful tool in the world of wearable technology or even intelligent sensors. The possibilities are virtually limitless, and the scientists behind the metamaterial are confident that with further work they could scale it up for industrial manufacturing.