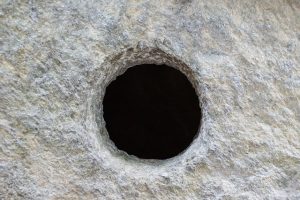 A new material is so dark that the human eye can’t even see it. People who have seen the material say it’s like looking into a hole. This new super-black material absorbs up to 99 percent of all light that hits it in all angles, making it the darkest material in the world. It is 26 percent darker than carbon nanotubes, which were previously considered the darkest. Since it absorbs more light than any other material, this new broadband light absorber can be used to improve optical interconnects and energy-harvesting devices. For example, it could be used to make solar cells that absorb the maximum amount of sunlight.

A team of engineers from Saudi Arabia’s King Abdullah University of Science and Technology developed this material with inspiration from a beetle that has unusually white scales. The beetle, called cyphochilus, appears extremely white because it has a thin layer of a highly reflective material on its scales. This material’s unique geometry allows it to scatter light very efficiently. The researches designed a similar structure that would absorb light instead of reflect it. They used a series of small nanoparticle spheres, each with a nano-cylinder on top.

The resulting structure can absorb light up to 99 percent in the spectrum that ranges between 400 and 1,400nm, which is more than the human eye can see. The research is described in Nature Nanotechnology in a paper called “Harnessing structural darkness in the visible and infrared wavelengths for a new source of light.”