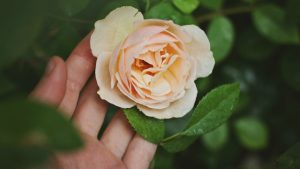 It has become common to use sensors for monitoring health in human bodies, but what about in plants? Researchers at Linköping University in Sweden have found a way to get unprecedented insight into how plants work by building electronic circuits out of roses. In a statement, lead researcher Magnus Berggren explained, “Now we can really start talking about ‘power plants’ — we can place sensors in plants and use the energy formed in the chlorophyll, produce green antennas, or produce new materials. Everything occurs naturally, and we use the plants’ own very advanced, unique systems.”

To make the cyborg rose, the researchers invented a polymer called PEDOT-S and dissolved it in water. The cut rose then sucked the polymer into the its vascular system. Once inside, the polymer formed wires inside the rose, which allowing electric signals to be transmitted. These wires were then connected to the plant’s natural electrolytes. In this way, the researchers built a working transistor and a digital logic gate. They also created a colored display on the leaves of a rose.

The researchers described their work in Science Advances. They wrote, “The roots, stems, leaves, and vascular circuitry of higher plants are responsible for conveying the chemical signals that regulate growth and functions. From a certain perspective, these features are analogous to the contacts, interconnections, devices, and wires of discrete and integrated electronic circuits.”