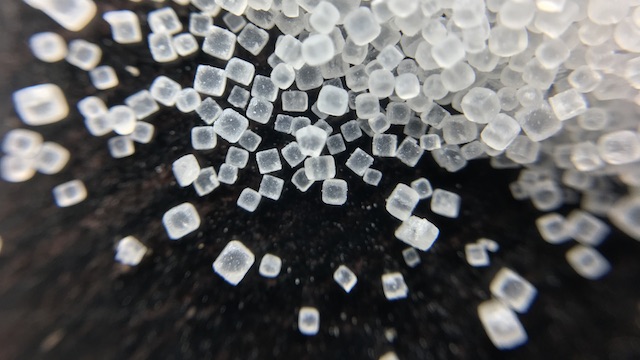 Scientists from Queen Mary University of London, Max Planck Institute for Solid State Research, and University of Cambridge have discovered a surprising way to improve battery performance. The secret turned out to be a little pinch of salt — and this discovery has big implications for the future of battery life.

Researchers uncovered this surprising fact after they added salt to the inside of a supermolecular sponge. The sponge was then baked at a high temperature. This turned the sponge into a carbon-based structure. What was surprising was how the salt interacted with the sponge. The salt transformed the sponge from a homogenous mass into an intricate structure, complete with webs, struts, pillars, and more.

Scientists were shocked by this turn of events, as these sort of 3D hierarchically organized carbon structures are incredibly difficult to grow in a lab. However, such structures are essential when it comes to providing batteries with unimpeded ion transport. The scientists went on to prove that using these materials in lithium-ion batteries helped them to charge extremely quickly. Furthermore, the batteries charged at one of the highest capacities.

These intricate structures have been named ‘nano-diatoms.’ Scientist believe they could be used in energy conversion and storage for other devices as well. 3D carbon-based nanostructures that come with multiple levels of hierarchy are capable of retaining physical properties such as good electronic conductivity. They can also come equipped with their own unique capabilities. Among those useful properties are directional pathways for fluid transport, improved wettability in order to facilitate ion infiltration, and high strength per unit weight.

While the nano-diatoms stole the show in this experiment, it’s important not to overlook the significance of the supermolecular sponge that was used. Also called a metal organic framework material, the sponge is made up molecularly designed porous materials. These materials have the potential for use in a variety of applications, including gas storage and separation. More significantly, their retention of high surface area after carbonization makes them a potentially viable electrode material in batteries.

Unfortunately, early attempts at carbonizing these sponges have not been successful. Carbonization resulted in preserving the structure of the initial particles. Only when adding salt were researchers able to discover these remarkable carbon-based materials. Scientists believe that these discoveries could be instrumental in research on energy story, conversion, and energy sensing.