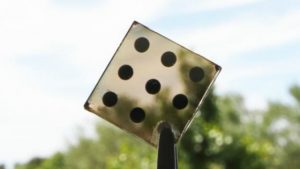 Conventional silicon solar cells are very good at converting sunlight into electricity, but they are also expensive to produce and are quite bulky. Lower cost alternatives often contain toxic or scarce materials. Therefore, researchers at The Institute of Photonic Sciences (ICFO) searched for photovoltaic technology that is thin, low-cost, flexible, and environmentally friendly, so that sustainable energy could be installed in more locations. They have developed a new kind of solar cell that is non-toxic, easy to produce, and made with abundant materials.

The new solar cell is made from AgBiS2 nanocrystals, a material that consists of non-toxic, earth-abundant elements. While silicon solar cells are processed at high temperatures, AgBiS2 is produced at the relatively low temperature of 100 degrees Celsius.

A very interesting feature of AgBiS2 solar cells is that they can be made in air at low temperatures using low-cost solution processing techniques without the need for the sophisticated and expensive equipment required to fabricate many other solar cells. These features give AgBiS2 solar cells significant potential as a low-cost alternative to traditional solar cells.

The researchers described their new solar cell in a paper that published in Nature Photonics on June 20. They conclude that AgBiS2 has strong potential as a solar-cell material that in the near future can compete with current thin film technologies that rely on vacuum-based, high-temperature manufacturing processes. So far, the new solar cell achieved a power conversion efficiency of 6.3 percent, but researcher Gerasimos Konstantatos says, “These first results are very encouraging, yet this is still the beginning and we are currently working on our next milestone towards efficiencies higher than 12 percent.”