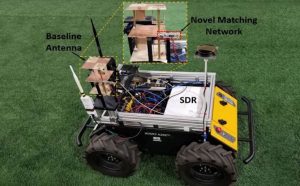 With the help of a brand-new low-frequency miniature antenna, mobile robots will enjoy powerful networking even in complex environments. The antenna is the result of a collaborative project between the University of Michigan and the United States Army Combat Capabilities Development Command’s Army Research Laboratory. The new antenna improves upon previous designs, providing a more robust network at low-frequencies.

To accomplish this, researchers studied impedance matching. This allows the radio to transmit power through the antenna while in transmit mode, with only minimal reflections. Conversely, when the antenna switches to receive mode, it can harness the power needed to couple to the radio over all frequencies in an energy-efficient manner.

“Conventional impedance matching techniques with passive components—such as resistors, inductors and capacitors—have a fundamental limit, known as the Chu-Wheeler limit, which defines a bound for the maximum achievable bandwidth-efficiency product for a given antenna size. In general, low-frequency antennas are physically large, or their miniaturized counterparts have very limited bandwidth and efficiency, resulting in higher power requirement.”

Engineers were then left with a unique challenge – create a miniature antenna that improves efficiency and bandwidth without changing the topology of the antenna or increasing its size. The end result involved applying a modular active circuit directly to an extremely miniaturized and efficient lightweight antenna. This design and approach allowed researchers to overcome the performance limit inherent in these types of antennas.

To create this unique design, engineers created a 15-centimeter prototype at 1 percent of the operating wavelength. Using this, they demonstrated that their innovative design was able to achieve more than three times the bandwidth enhancement of an antenna without the benefit of active matching. In addition, the enhancement improved transmission efficiency by 10 times when compared with similarly sized state of the art actively matched antennas.

This new design allows robots to create and form teams, which could aid in applications such as distributed on-demand beamforming, which would be a significant advantage in ensuring secure and directional networking on battlefields. Engineers on the project will continue to perfect their design, which they believe could prove extremely useful in developing advanced communication systems for the US Army.