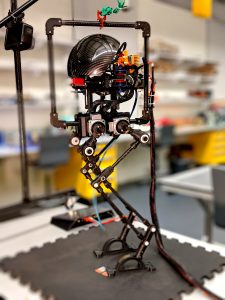 Scientists at Northeastern University have constructed a new robot that can both walk and fly, which could make it ideal for interstellar exploration. While robots can usually either fly or walk, this model can do both — allowing it to manage the terrain of even the most inhospitable of planets.

The robot is called LEONARDO, or Leo by his creators. The name is an acronym for LEg ON Aerial Robotic DrOne. The robot comes in at about two feet in height, and weighs about six pounds. Its light weight is thanks in large part to its carbon fiber structure, which provides ample strength without weighing down the structure. Each side of the robot is equipped with a thruster; these allow Leo to both fly as well as make powerful leaps from surface to surface. Perhaps most significantly, the thrusters help prevent the robot from falling over, which has long proven a major concern for scientists creating two-legged devices.

“This is the major challenge for legged systems, or even humans: We can stabilize our body, but sometimes we fall. What if we could have a robot that never falls?”

Alireza Ramezani, an assistant professor of electrical and computer engineering at Northeastern University

The inspiration for the robot came from studying the movements and motions of birds. By studying how they can walk, run, and fly, scientists were able to mimic their mechanics and incorporate it into their own design.

Although Leo is still a long way from traveling over the surface of a distant planet, scientist believe it could serve as the ideal prototype. The robots unique shape and design lend itself to long leaps over uneven surfaces, and walking along unknown worlds gathering data.

Leo is currently residing at the Caltech Center for Autonomous Systems and Technologies. Scientists are working to improve upon Leo’s original design, streamlining the overall structure as well as adding sensors. Researchers believe that one day robots like Leo could receive and send back data to scientists on Earth from planets far from ours.

The scientist who originally created Leo, Ramezani, is meanwhile working on an updated version of the robot. It will be used by students at Northeastern University as a learning platform, and a sign of the possibilities in the field of robotics.