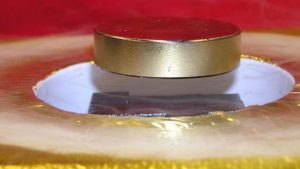 Physicists at the University of Houston have discovered some important flaws in a 50-year-old theory that explained how superconductors work. In 1962, a General Electric scientist named C.P. Bean described the way a superconductor traps and holds a magnetic field in what is commonly known as the “Critical State Model.” This theory has been widely accepted until recently, the Houston team revealed that their experimental results didn’t match Bean’s predictions. They described their research in AIP’s Journal of Applied Physics.

Superconductors have zero electrical resistance, and some of them, called “trapped field magnets” (TFMs), can be used to store magnetic energy. They have limited practical applications because superconductors normally only work at extremely low temperatures, but they are used in some amazing machines, such as MRI machines and the particle accelerator that CERN used to discover the Higgs boson.

To make them work, scientists apply a magnetic field to a superconductor via a pulse field magnet after the superconductor is cooled. Today’s common practice follows Bean’s model, which says that the pulsed field must be at least twice as strong (usually over 3.2 times as strong) as the resulting field of the TFM. The Houston team, however, discovered that for certain constraints on a magnetic pulse, Bean’s model is wrong, and a significantly different spatial distribution of field occurs. Roy Weinstein, the lead author of the study, explained:

While Bean’s model says TFMs can only reach a maximum of 3.75 Tesla, Weinstein’s team’s discovery means the maximum TFM field is actually 12 tesla. Stronger TFMs could be used, for example, to make a motor produce more torque, or the same amount of torque as it always has, but a drastic (tenfold) reduction in materials, which means it could do the same work as before, but it would be less expensive. This discovery could lead to many other improvements in machines that use superconductors, as well as open the door to entirely new applications. “While we now know enough to apply our new discovery to significantly improve a large number of devices, we don’t yet fully know what’s going on in terms of the basic laws of physics,” Weinstein says.