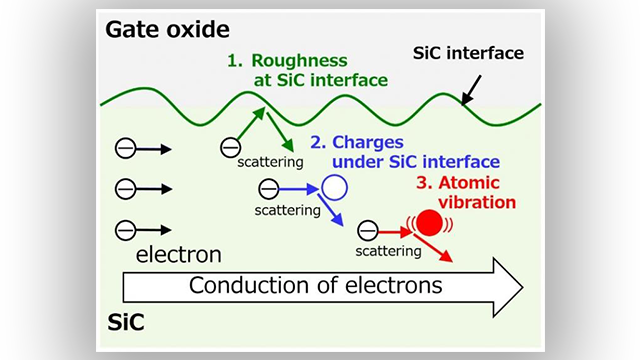 Through their research, the team of scientists has determined that resistance under the SiC interface can be reduced by two-thirds. To achieve this, they have to suppress electron scattering by the charges. This work will prove a huge benefit to the electric power equipment used in a variety of applications. In this day and age, virtually every industry is focused on increasing efficiency while reducing size.

Mitsubishi Electric in particular is focused on accelerating the use of SiC devices for power semiconductor modules. These are essential components in most electric power equipment. SiC power devices are popular in particular because they offer a distinctly lower resistance than traditional silicon power devices. The trick is to lower their resistance even further; it’s also essential when it comes to truly understanding the characteristic of said resistance under the SiC interface.

“Until now, however, it had been difficult to measure separately resistance-limiting factors that determine electron scattering.”

Technology from the University of Tokyo was used to measure the scattering of electrons, focusing on the atomic vibrations. It was determined that the impact that atomic vibration and charges have on electron scattering under the SiC interface is dominant in the analyses of fabricated devices by Mitsubishi Electrics.

There are three factors that can limit electron scattering under the the SiC interface. These are the roughness of the SiC interface, the atomic vibration, and the charges under the interface. However, the exact contribution of each factor has been a mystery until now. To solve this puzzle, scientists fabricated a planar-type SiC metal-oxide semiconductor field-effect transistor (SiC-MOSFET). This allows the electrons to conduct away from the SiC interface up to several nanometers.

Comparing their work to that of an earlier planar-type SiC-MOSFET device, scientists were able to reduce resistance by two-thirds. They accomplished this by suppressing the electron scattering by having the electrons conduct away from the charges under the SiC interface.

Although this is exciting progress, it’s only the beginning. The research team will continue to work on lowering the resistance of SiC power devices.