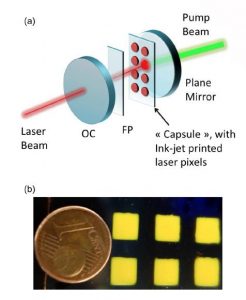 Inkjet printed “lasing capsules” serve as the core of an organic laser. Figure (a) shows a schematic of the laser setup, while figure (b) shows actual lasing capsules, which would cost only a few cents to produce. OC stands for “Output Coupler” and FP stands for Febry-Perot etalon.

Buying new lasers could soon be as cheap and easy as replacing the blades in a razor or changing an ink cartridge for a printer. Researchers from France and Hungary have developed a new kind of laser with a disposable, replaceable core. They used organic lasers, which are less common than the inorganic lasers that are found in everyday consumer electronics. Organic lasers have not been desirable because they degrade quickly, but the new manufacturing technique makes the core so inexpensive that it can easily be replaced whenever it stops working.

“The low-cost and easiness of laser chip fabrication are the most significant aspects of our results,” said Sébastien Sanaur, an associate professor in the Center of Microelectronics in Provence at the Ecole Nationale Supérieure des Mines de Saint-Étienne in France. His team used a simple inkjet printing technique to deposit small square shapes of commercial ink onto a quartz slide. The resulting ink became the gain medium—the core of the laser that amplifies light and produces a narrow, single-colored beam of light.

The researchers estimate that this disposable core can be produced for just a few cents. “By piezoelectric inkjet printing, you print ‘where you want, when you want,’ without wasting raw materials,” Sanaur said. When the laser starts to degrade, users could simply swap out the core, while reusing the rest of the laser (mirrors and an energy source). Potential applications for the disposable laser include sending data over short plastic fibers and serving as a tool for analyzing chemical or biological samples. The researchers describe their new technique in an article, “Inkjet-printed vertically-emitting solid-state organic lasers,” which published in the Journal of Applied Physics.