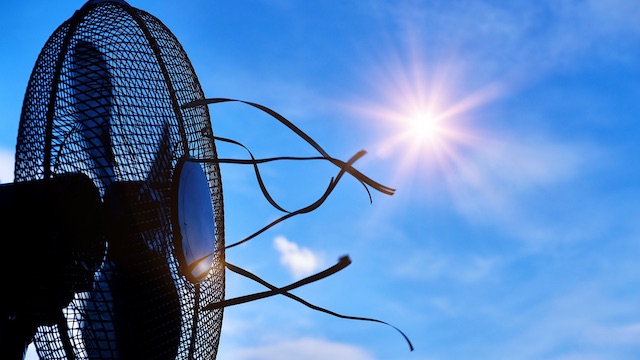 Researchers from the Massachusetts Institute of Technology (MIT) have come up with a new method for keeping cool on hot days. Their method relies on inexpensive materials, and absolutely no fossil fuel to get it running. This new passive system could be used to keep people, medication, and assorted foods cool in even extremely hot climates.

The system is designed to allow heat to emit from it at mid-infrared ranges of light. This can then pass easily through the atmosphere and spread out into outer space. Since space is cold and the emissions are hot, they push through the gases which operate as a greenhouse. A strip of metal is suspended over the device; this blocks direct sunlight from the system and prevents it from heating up as a result.

Scientists believe that their new system could drop temperatures by about 36 degrees Fahrenheit in certain climates. In their initial proof-of-concept testing, researchers were able to achieve a cooling of about 11 degrees Fahrenheit. Should additional cooling be required for any reason, scientists could opt to employ thermoelectric cooling or even conventional refrigeration systems.

Scientists have attempted to perfect passive cooling systems in the past, but have not had much success. Most of these other systems have required complex engineered photonic devices in order to function; these can be prohibitively expensive, making commercialization a distinct challenge if not a downright impossibility.

The creators of this new system kept things simple. Their device is constructed out of cheap plastic film, white paint, insulation, and polished aluminum. The system mimics how natural objects traditionally cool themselves, by emitting heat through mid-infrared radiation. A simple strip of metal is all that is needed to prevent the sun from interacting with the object and heating it up, which has the added bonus of not requiring any sort of active tracking.

“It’s kind of deceptively simple. By having a separate shade and an emitter to the atmosphere — two separate components that can be relatively low-cost — the system doesn’t require a special ability to emit and absorb selectively. We’re using angular selectivity to allow blocking the direct sun, as we continue to emit the heat-carrying wavelengths to the sky.”

Scientists are now hard at work perfecting their design. They’ve applied for a patent, and are looking into commercialization of this new cooling technology.