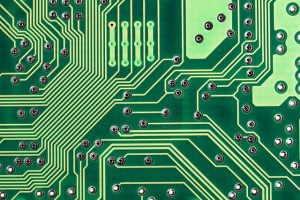 Image by Michael Schwarzenberger from Pixabay

An international team of scientists has discovered a way to write two-dimensional electronic circuits — and all while investigating another scientific mystery. What started as research into the curious properties of metal particles led to a discovery none of them expected.

It all began with a chain of spheres. The scientists would take a needle-shaped electrode and stick it into micron-sized metal particles, which had been dispersed in silicone oil. A single sphere would stick to the end of the electrode. Then another sphere would attach to the first, and so on. Scientists ended up with a long chain of spheres and a whole bunch of questions.

The scientists investigated further, studying the electrode’s electric field and how it interacted with the properties of the particles. By dipping the electrode into a colloidal solution, it could polarize each and every single sphere. That amounted to hundreds of thousands of spheres, and chains reaching up to 30 centimeters long. This explained how the chains were formed, but led to an even greater discovery.

The team learned that the chains made of spheres could maintain their structures, thanks to connections forming between the particles. Attempts to pull the chain out of the liquid resulted in silicone oil coating the spheres, protecting them and keeping the chain unbroken.

While interesting on its own, this discovery led to a greater realization: it can be used to create two-dimensional electronic circuits. All the scientists needed to do was remove the chain from liquid, and drag it along a surface to create a pattern. Instead of using silicone wax, scientists can use molten wax that will allow the structures to hold their shapes.

Perhaps most exciting are the number of possible applications this discovery has. The scientists behind it believe that it will lend itself to discoveries not yet made; in fact, we may not have the technology to fully appreciate this innovation just yet.

“Though simple, our method for fabricating colloidal structures is very elegant and can be used for many applications, including fabrication of conductive paths on different substrates to be used, for example, in electronic applications.”

These amazing circuits are proof that sometimes the simplest solution is also the best — especially when it comes to electronic circuits.