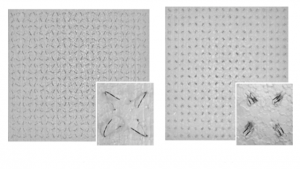 Researchers at Aalto University in Finland developed absorbers that do not reflect light over a wide range of frequencies. Absorbers are usually made of metasurfaces, materials that are engineered to guide and bend electromagnetic waves. Unfortunately, the absorbers are either fully reflective or the range of low reflection is very narrow. The new absorbers, however, are completely transparent at non-operational frequencies. The researchers achieved this using metasurfaces with structural inclusions whose electric and magnetic properties are strongly coupled.

Researcher Viktar Asadchy explained to In Compliance that an ideal absorber should be both electrically and magnetically polarized. He said, “All conventional absorbers consist of two types of elements. One type is responsible for creating the electric response. Another one is for magnetic response. However, the problem of all the known absorbers is that these elements of the two different types can be matched to free space only at a single frequency or at a narrow band (the operational band) being mismatched elsewhere. In other words these elements reflect incoming waves of nonoperational frequencies.” Asadchy’s absorber is different because it is made of elements of the same type, but they are intended for creating both electric and magnetic responses to incident waves. This enables the absorbers to become matched for radiation at a very broad range of frequencies, yielding zero reflection.

Eliminating reflection has many implications. Asadchy  said, “In ‘EMC’ language, it is important for designing band-stop filters, for example. For these filters it is necessary to have a transparent structure at frequencies outside of the operational band.” He continued,“Our absorber is the first realization of such filters for propagating waves (microwaves). All conventional absorbers either totally or partially block radiation of non-operational frequencies, casting a shadow behind.”

It’s not just interesting science—these non-reflective absorbers have several real-world applications. They could be used as filters of radiation of particular frequency range (filters that transmit Wi-fi signals and stop cell phone signals for example), or in bolometers and sensors for radio astronomy. Asadchy says that the sensors are especially well-suited for stealth technology application, such as hiding non-metallic objects from radars. The research is described in a paper in the open access journal Physical Review X.